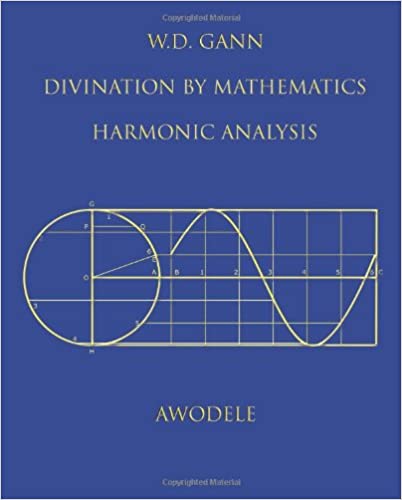 In reading and studying Gann’s novel, The Tunnel Thru the Air or Looking Back From 1940, a certain set of passages had always grabbed the author’s attention and he wondered what Mr. Gann may have been referring to. This book is a result of his investigations concerning these passages, which concerns itself with what Gann calls in his novel, the Law of Harmonic Analysis. In the author’s previous work, W.D. Gann: Divination By Mathematics, published in June of 2013, he pointed out that Astrology was not the main factor that Gann utilized to forecast future events. Even Gann said that in the 1919 Milwaukee Sentinel article which is analyzed in that book. In the article, Gann uses the science of letters and numbers to make predictions regarding the German Kaiser, Wilhelm Hohenzollern. In the analysis of that article, the author showed how Gann may have used cycles and geometry to forecast the specific dates and periods mentioned. In this second book, the author continues with the mathematical aspect of Gann’s work, the foundation of which, is based on a couple of passages within Gann’s novel, The Tunnel Thru the Air. The author shows us that Gann was indeed trying to tell us something valuable in these passages, and this book outlines the author’s research & investigation into what he believes Gann was talking about, and the application of those findings. You will learn how to apply the mathematics being presented, which is explained in simple terms for the non-mathematician. Gann was consistent in saying that mathematics was the basis of his forecasting methods. The material presented in this book is consistent with what Gann has always said. It is the hope and desire of the author that this work will inspire others to continue research into Gann’s work along these lines. Even Gann said that Astrology failed, that something else had to be added into the equation.